What is spaghetti squash? 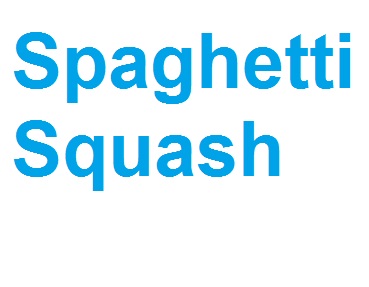 What is spaghetti squash? Well, as you can probably guess, it's a squash. Or rather, it's a group of squashes. In terms of color, they range the gamut from pale ivory to bright yellow and orange. Spaghetti squash carry many seeds within their centers. Wrapped around all this is the flesh, which is typically orange or yellow in color; the orange types are higher in carotene than their turmeric colored counterparts. The flesh of spaghetti squash is solid when it's raw, but, when it's cooked, it falls away into thin ribbons (hence its name).

Like other squashes, spaghetti squashes are best purchased in late summer and fall. In the kitchen, they're quite versatile; you can roast them or grill them, bake them or boil them, or use them to flavor a nice broth. The end result will always taste good; like tofu, spaghetti squash is one of those foods that blends nicely in the background. It can also make a good main course. If you're baking it, puncture it before you put it in the oven you don't want it exploding once it's inside.

With its coarse, fibrous texture, spaghetti squash has relatively low calorie content. It's fairly filling, so it’s good for periods of fasting. Many people who follow low-carb diets have said that they love it. Because of this, it can be difficult to find in stores demand occasionally outranks supply.

One good thing about spaghetti squash is that you can use it to make fake pasta. Actually, it's just spaghetti squash cooked in a way that looks (and feels) like spaghetti. This is pretty neat, as it's a healthy, tasty option for vegans. Add tomato sauce, and you wouldn't even be able to tell the difference.

Here’s a fun fact: although “squash,” “pumpkin” and “gourd” all technically mean the same thing, “squash” is a catch all term that refers to all those varieties that aren't pumpkins or gourds.