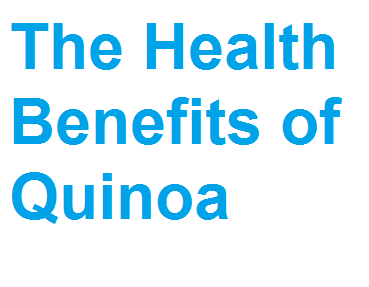 Quinoa (it's pronounced as “keen-wah”) is one of the newer trends in healthy eating. It looks like a grain, and in the culinary world it's considered as being in a grain (like bulgur or rice), but in reality it actually belongs to the same family as chards, spinach, and beets. You can buy quinoa in two varieties: the red type and the white type, which is creamy.  Quinoa was initially grown in the Latin American countries of Bolivia, Peru and Chile for thousands of years. Here, it was a fundamental part of the diets of both the Incas and their descendents. Now, it's enjoyed by people from all over the world.

Click here and see the best selling Cookware at Amazon

Quinoa is so good for your health that the UN named 2013 the “International Quinoa Year.” First, it has twice the amount of protein that rice or barley does; its protein content is actually similar to that of milk. This is because it contains all nine amino acids, including lysine and isoleucine acids, which are less common. We can consider the amino acids as being the components of proteins, so, when you eat quinoa, you're consuming a complete source of protein. This makes it an especially good choice for vegans and vegetarians, who often struggle with getting enough proteins.

It also contains omega 3 fatty acids, which are great for your heart. Moreover, it's low in calories; for a quarter of a cup of quinoa, you'll consume some 170 calories.

Quinoa contains no wheat, so it's a good choice for people who have celiac or other gluten intolerances. It's the least allergenic of culinary grains. It also has significant amounts of riboflavin, which reduces the incidence of migraine attacks. Plus, it also contains saponins, which promote your skin’s healing abilities.

Quinoa has been correlated with preventing and treating diseases. This is because it contains phytonutrients, which are anti-inflammatory. It also contains more good fats (monounsaturated fats) than common cereal grasses.

Eating quinoa is a great way of adding calcium, manganese and magnesium to your diet. It's also ideal if you want to increase your intake of vitamin E, dietary fibres, and certain B vitamins.

With its crunchy feel and nutty taste, quinoa is delicious no matter when you eat it whether for breakfast, lunch, dinner or even as a midnight snack. You can also use it to make sides or appetizers. Examples of meals include vegetarian casserole, salad with quinoa, lentil and feta cheese, and quinoa rice pilau with roasted tomatoes.